The process of seahorse reproduction is very interesting. Studies show that the males and females will court for several days. During that period of time they will seem to take part in dancing rituals. They will be seen swimming side by side at the same pace. They want to be able to mirror the movement of the other in sync.

The males and females often look very much alike. Experts have been able to tell them apart prior to mating by the way they look on the abdominal area. The females are rough and pointed here. The males have a round area that is very smooth and you can see the pouch. That is where those eggs are going to go which we will cover in just a minute.

The male has a pouch on one side of the body. When it is time to mate the female will deposit as many as 1,500 eggs into that pouch. The pouch isn’t very big but they eggs are amazingly small. The larger the species though the larger the eggs are going to be. The male will carry the eggs up to 45 days and then the young will emerge fully developed.

During that period of time while they eggs are inside of him the female will come check on him daily. The young are usually going to be born at night but some instances of them being born during the day occur. The males become very aggressive while carrying the eggs, and that can help them to ensure they are able to grow and mature in his body until they are born.

They will be released into the water and the male will leave them alone. It is possible that the female will deposit more eggs into his sack the next day if they mate early in the season the first time. The males will puff up very large as they are getting closer and closer to the young being born.

It is believed this puffing is a way to help deter predators from him. Since the seahorse doesn’t have any way to defend itself this size differentiation can prevent various forms of predators from messing with it. This is a natural way for the seahorse species to continue to have the circle of life continue for them. 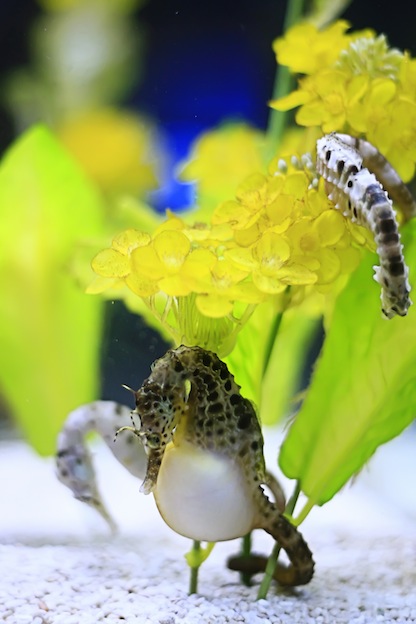 The young seahorses have to care for themselves when they are born. This is why there is a very high mortality rate. Less than 1% of them live long enough to become mature enough to mate themselves. Those that do live to the age of maturity have an average life span that covers from 4 to 6 years.

In many areas there are farms that specifically work towards increasing the population. They will take the young and ensure they are protected for the early stages of life. Then they will return them to the wild as they mature. However, this is only a temporary fix and not a solution for locations where the population has become very low.

You may often hear it said that the seahorse will mate for life. However, many species are only going to keep a mate for one season. They are well known for switching mates often. They are often known to be in groups and to swap mates within the group.

The dynamics of this can vary based on specific species of seahorses. You may want to look at them to compare them. It also depends on what occurs in the wild. When their natural environment is upset it can cause some changes in the way that they are going to find a mate and if they stay with it or not.