The Pacific Seahorse is a well known species due to the wide areas it is found it. This is also one that is commercially grown so that it can be sold as pets. The chances of survival are better when that is the case so that they are bred with the right conditions. They don’t seem to be in jeopardy of extinction even though large numbers of them are extracted from the wild annually for various purposes.

With a size of about 12 inches the Pacific Seahorse is one of the largest of all species you will find in the world. The males are bigger than the females by a few inches. There can be diversity among the sizes based on habitat location.

They range in colors based on the location where they live. To help them avoid predators they have the ability to blend in to what is all around them. They are often gold, maroon, brown, white, or a combination of colors. The females often have a line of dark coloring down their body.

The coast of Columbia, Costa Rico, El Salvador, Mexico, Panama, Peru, and the United States are where you will find the Pacific Seahorse. They have one of the largest distributions of all species. They tend to stick around the coral reef locations.

Many people come to the coast of San Diego California to explore them in their coral reefs while snorkeling. They are often found in the water regions that are from 100 to 600 feet in depth. However, this can often disrupt their natural environment so it is important for people to be careful when they examine the coral reef locations. 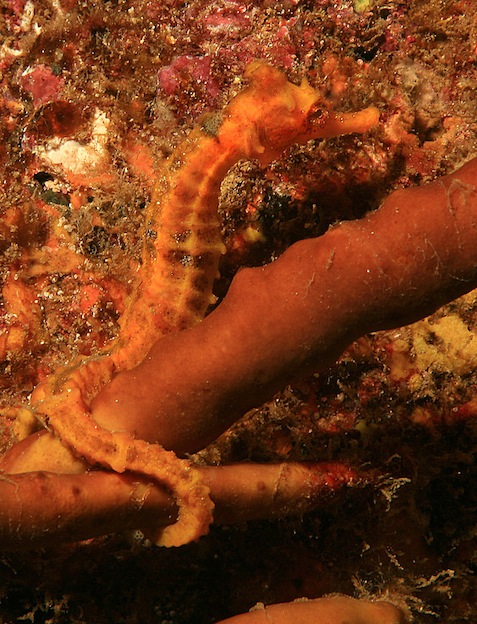 Brown algae is commonly found in the areas around the habitat of the Pacific Seahorse. It isn’t unusual for them to just be out there floating along. They are going to be mistaken for algae and that helps their overall survival. They don’t swim fast and often need to rest. They look for low currents so that they can be in water that won’t cause them to become easily exhausted.

Plankton, small microorganisms, and crustaceans make up the diet for the Pacific Seahorse. They swallow their food whole so it has to be small enough to fit into the snout. They feed often as they don’t have a digestive system. They also eat slowly so a great deal of their life is spent searching for food and then consuming it. They seem to be able to find more than enough food in their natural habitat.

When males and females find each other they can take part in courtship rituals. This can lead to successful mating after they have choreographed their movements to be the same as each other. This can be a time consuming effort for them to successfully complete.

The female will then deposit eggs into the male. He has a pouch where he will keep the eggs safe for a couple of weeks. During this period of time his body will swell up to many times the normal size. This is a way for him to be able to avoid predators until the young arrive.

There can be hundreds of eggs deposited at one time. The average length of time for them to be born is 2 weeks. The warmer the temperature is the faster they will grow and arrive. The young have to be able to fend for themselves from the moment they arrive. They will mostly be consumed as  prey though and so only a very tiny fraction of them will reach the age of maturity.