One type of aquatic life is the Leafy Sea Dragon. They are called by this name as they have what looks like a leaf on their body. This is the main way that they are able to remain well hidden from predators. They are well known around Australia as a source of good luck.

That is why you will see this particular symbol as part of the various festivals and activities that occur there. While you can barely see them the Leafy Sea Dragon does feature both pectoral and dorsal fins. Their bodies simply look like a plant that is just flowing along in the water. That helps them to remain unharmed. They don’t have a coiled tail either so that makes it even more appealing that they are part of the foliage and not something alive.

This species of seahorse can be about 8 inches long so it is among the largest that you will find out there in the wild. The females are smaller than the males with an average size ranging from 6 to 7 inches. They are also considered to be one of the most unique looking of all species in the world. They don’t feature the prehensile tail that is very common for seahorse species.

When the water is calm you will find that the Leafy Sea Dragon remains still for very long periods of time. When it isn’t feeding it is going to be resting. They can become tired out very easily. When the water moves too fast they are at risk of dying from exhaustion. This can kill large numbers of them when there is a terrible storm.

The powerful sense of direction that they possess is very interesting to experts. They are able to move long distances in an effort to find food. However they are able to find their way back to the same location for resting again and again. When they do move it is about 1/8 of a mile per hour so they are one of the slowest types of seahorses in the world. 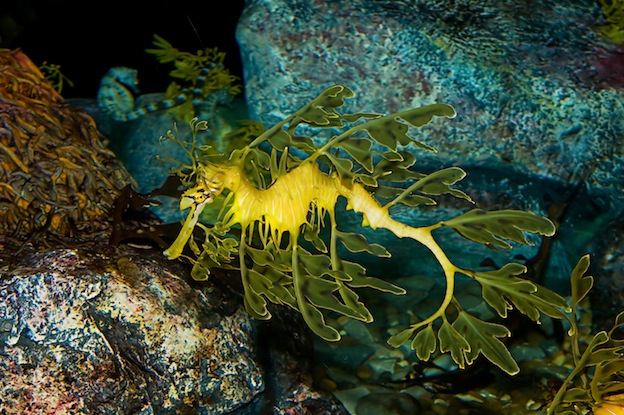 There are many different regions around Australia which are home to the Leafy Sea Dragon. They are only found living in bodies of saltwater. They need it to be very warm so they tend to stick to the tropical areas and are going to be found around the shorelines. The water has to be at least 74 degrees Fahrenheit for them to survive.

Today the common places where they live are Jurien Bay and Kangaroo Island. The fact that their natural habitat has continued to be depleted means they aren’t as diversified as they once where. They are hard to find too as they stay in the rocky regions and around the sand.

There is very little information at all out there about the evolution of the Leafy Sea Dragon. There are some fossil remains of seahorses though that date back more than 3 million years. It is believed that these branched out from them and that they were once much larger than what we see today.

There are many types of food that the Leafy Sea Dragon depends on in their natural environment for survival. This include shrimp, crustaceans, and plankton. They will eat what they happen to find in any given environment so the diet can vary based upon location.

The snout of this seahorse is very long and it works as a pipe method for them to suck food resources through. They don’t chew food as they don’t have teeth so what they consume has to be small enough to be swallowed in one piece. They feed at a very slow pace.

They also have to eat very frequently which may be surprised for such a small living creature. The reason they have to feed so often though has to do with the fact that they don’t have any digestive system to hold the food.

The males are usually isolated and timid but when it comes to mating they will become aggressive in their search for a female. They will fight with each other too for the right to mate. When a female is ready to mate she will spend several days with the male. During that period of time they will engage in movements with each other.

The goal is for them to be able to have the movements of their body the same at the same time. This takes practice but they do pick up the process very quickly. The males are the ones that will be carrying the young until they are born. The female will be able to deposit eggs into the pouch on his abdomen once they have their movements timed perfectly.

The eggs are light pink in color and they are very small. There can be as many as 200 of them that she places into the pouch of the male. He will carry them for about 9 weeks but if the water is at a high temperature they can be born weeks sooner than that. If the couple mates early in the season then there is the possibility a second batch of eggs can be deposited as well.

The young are very small when they arrive and they have to care for themselves. They don’t get any help from the male or the female. As a result there is very little chance that more than a handful of them will live to the age of maturity. Most of them will become prey for various other creatures that live in the same bodies of water. 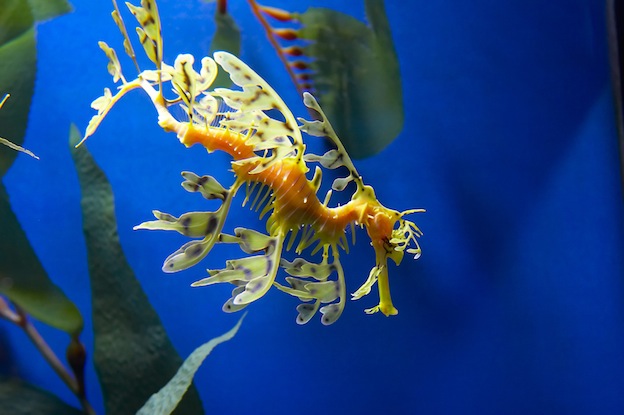 Due to the physical appearance of the Leafy Sea Dragon they don’t really have any natural predators in their environment. They blend in to the surroundings so amazingly well that they aren’t detected as a food source even when predators are right there in front of them.

What does happen though is that they are often consumed when fish and other predators are there trying to feed on other elements in the water. The foliage around them may be taken in too and that often means the Leafy Sea Dragon who certainly seems like just another piece of it.

The young that just emerge from the eggs though don’t have the leafy camouflage on them yet. It takes several days for it to start to emerge. This is why they are so often found by various predators out there. They are often consumed fast in groups before they have had the chance to really spread out into the environment.

The real threat to them though comes from humans. The fact that there is so much pollution in the water makes it very difficult for them to survive in their natural environment. Their habitat can be taken away and then it is harder for them to blend into it and remain hidden.

In many locations they end up in fishing nets and captured for commercial use. The goal is for them to be sold in the pet trade. Due to the great unique look of the Leafy Sea Dragon there is quite a market for it. The problem though is that many people don’t know how to properly care for them in captivity so they don’t live very long.